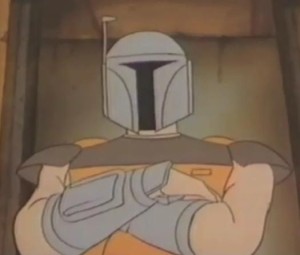 Boba Fett revealing himself to the Fromm gang 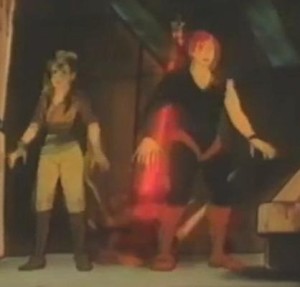 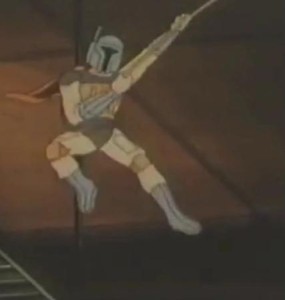 Boba Fett swinging on a rope 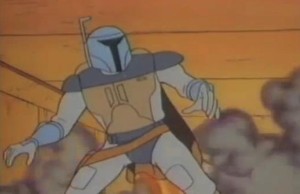 Boba Fett blasting off with his jetpack in pursuit 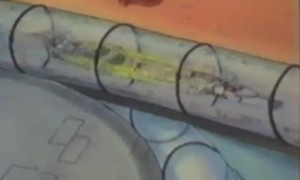 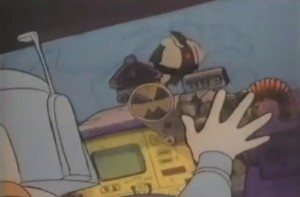 Boba Fett watching the thermal detonator get affixed to his windshield 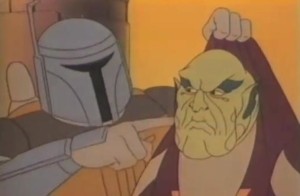 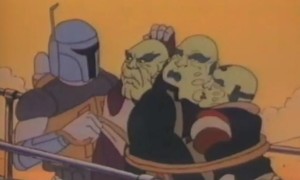 Continuing on my exploration of Boba Fett’s appearances on television and movies, the fourth time that Boba Fett appears is in the Star Wars: Droids episode, “A Race to the Finish” (1985).  While Fett is not the main character, he does play a pretty important role in this episode, which takes place before Star Wars, Episode IV, so it’s actually the earliest chronological appearance of Fett thus far.  And, yes, if the animation looks familiar, that’s because this series was animated by the same company that animated his first appearance in the Star Wars Holiday Special.

Boba Fett appears, courtesy of Sise Fromm, to whom Fett owes a favor (which is why Fett won’t turn in Fromm to Jabba the Hutt, who has a bounty out on him (“Have no fear, Sise Fromm.  I owe you a favor: I shall do as you ask.”)).  However, he sternly addresses Fromm by saying: “No one escapes me.  I have someone on the job.  Just remember: after this, we are settled, Sise Fromm. After this, I owe you nothing.”  This portrays Fett as being involved in this strictly as a business deal and not a friendship.

We can get a sense of Fett’s reputation, when Tig Fromm worriedly inquires to Vlix Oncard: “Why are we getting mixed up with that bounty hunter?” Oncard replies: “Ahhh, they don’t come much worse than him.  I almost feel sorry for those two speeder racers.”  From this dialogue, it’s clear that Fett has a reputation for being rough and that they are aware of him and scared of him.

In Boba Fett’s pursuit of his bounty, he shoots lasers from his wrist, uses a rope that he also shoots out to swing down on, and uses his jetpack to give chase to the kids.  While in pursuit – unbeknownst to Fett – Tig Fromm sets a thermal detonator on the kids’ speeder.  Fett uses his jetpack to get to his speeder, the Silver Speeder.

Catching up to the kids’ speeder, he tries three different tactics in trying to catch them:

Boba Fett avoids getting blown up when he jets out of his speeder and away from the blast.

When the kids win and regroup, Jord Dusat quizzically inquires: “Was that Boba Fett? I’ve heard of him. Why would a bounty hunter bother with us?”  While it makes sense that gangsters would know who this bounty hunter is, Fett’s reputation is so impressive that even these kids know who he is!

At the end, Boba Fett comes after the Fromm Gang and upbraids them: “Your meddling has cost my droid, my speeder, and, almost my neck, Tig Fromm!”  He figured out that the thermal detonator was put into play by Tig Fromm and went after them.  What’s worse, however, is that it seems that Fett was upset that there was meddling in his operation – he could have had it under control: if they hadn’t introduced the thermal detonator into play, he would not have had to abandon the Silver Speeder and would have been able to chase down those kids.  It seems that he likes to handle his jobs by himself!  Moreover, he was super upset that their meddling could have killed him and that they did cause the loss of his speeder and more.

In sum, here’s what we see about Boba Fett from this episode:

Yes, the Star Wars Holiday Special is Bad, but Here are a Few Reasons you Might Want to Watch
This entry was posted in Star Wars and tagged Boba Fett, Star Wars, Star Wars Wednesdays. Bookmark the permalink.