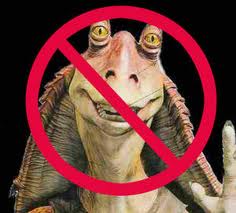 Having found myself in conversations with people about Star Wars, inevitably, people say “I enjoyed the original trilogy, but did not like Episodes I-III.” Now, that’s a fair comment to make, although I say, “Look, Episodes I & II aren’t that bad, if you remove Jar Jar Binks and the romance scenes in Episode II (the acting and writing for those scenes are so painfully bad).” After a while, I finally decided I needed to create a version whereby I did just that for both Episode I and for Episode II.

However, in continuing to talk with people, I realized it wasn’t enough – I didn’t go far enough in removing material from these two movies. So, I removed far more material: while I largely took the material from my previous versions, I further reduced them, primarily by removing a lot more of Episode I. I removed almost all of the scenes on Tatooine, since we don’t really need to know that much about Anakin’s background and because it seems to drag the movie down. 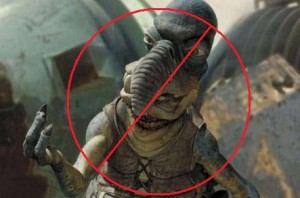 Tatooine is kind of a drag in Episode I, so I decided to get rid of all of the Watto scenes (in Episode I) – I left Watto in for Episode II, though

The only piece of Tatooine I left in was Darth Maul being there to attack the Jedi.  In fact, Episode I, with Tatooine largely removed as well as Jar Jar Binks not being there (oh, and I got rid of any of the scenes underwater), becomes essentially about two things: 1) the invasion of Naboo and the resulting battle & 2) the Jedi discovering the existence of the Sith.  Yes, there’s also Anakin happening to blow up the droid command ship (which is a clear foreshadowing of what his son does in Episode IV).  This reduction certainly makes Episode I move not only more swiftly, but it’s also a lot more action-oriented, which is greatly more enjoyable than seeing Watto haggling with Qui-Gon Jinn!

For Episode II, as I mentioned, I largely left out all of the romance scenes between Anakin Skywalker and Padme, Jar Jar Binks (except where necessary), and when our protagonists find themselves on Geonosis in the factory. 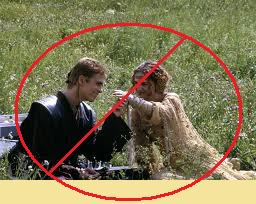 This leaves the movie to be largely about Obi-Wan Kenobi tracking down the origins of who may be plotting to assassinate Padme.  While this is certainly a lot less action-y, it definitely has an interesting investigative storyline (almost like a cop show), leading to the curious clone-production facility on Kamino.  This is, of course, where things pick up, action-wise: Obi-Wan fights with Jango Fett, then follows him to Geonosis, leading to his encounter with Count Dooku.  Of course, Obi-Wan doesn’t give in to Dooku, leading to his being expected to fight to the death with monsters alongside Padme and Anakin (who exchange a kiss for the first time in this version).  Here on out, I leave in everything from the original version, since it then turns into the best part of the movie, with some great fighting, etc. etc.

Since these versions of Episodes I & II have had so much material removed from them, I decided to combine them together, since their runtime amounts to be the same as the full cinematic release runtime of either of these movies.

I hope that, when watching this abridged & combined version of Episodes I & II, people will appreciate and enjoy these movies.  Last week, I had a few people over to watch it and comment on it.  Fortunately, they enjoyed it, although they did point out that I left out the scene in Episode I whereby Senator Palpatine is able to manipulate Queen Amidala into making a motion of a no-confidence vote against Chancellor Valorum, leading to the Palpatine’s ascension into the post, which I plan to put back in.  They also pointed out that there were pod-racing comments made about Anakin, which doesn’t make sense without the pod-racing scene being included.  Otherwise, I’m glad they enjoyed it, too!