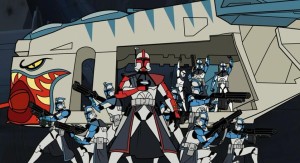 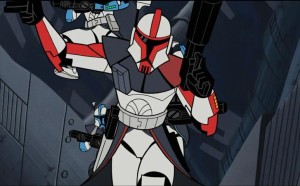 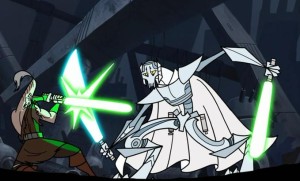 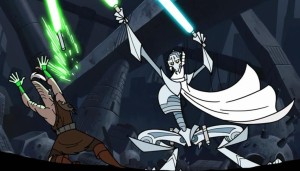 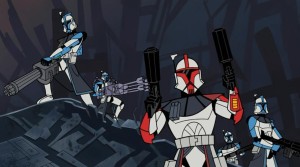 ARC Troopers about to unload on General Grievous 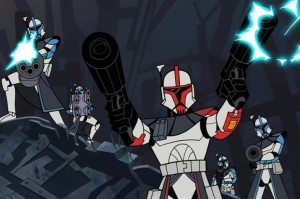 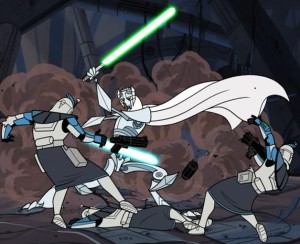 Ki-Adi-Mundi being held back from pursuing Grievous 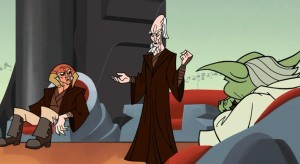 Obi-Wan Kenobi advocating for Anakin to become a Jedi knight 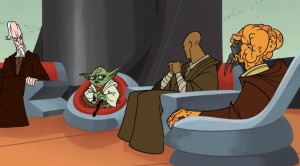 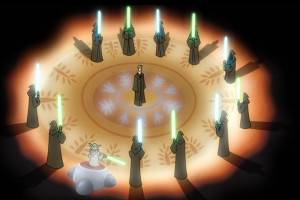 Anakin about to become a Jedi knight 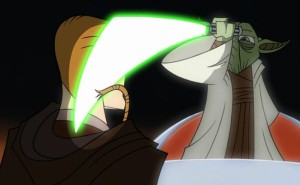 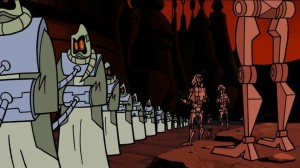 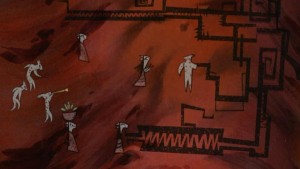 Foreshadowing vision of Anakin in cave 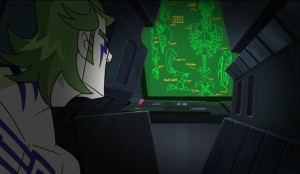 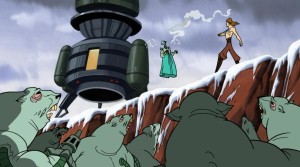 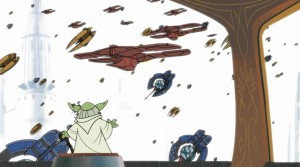 Yoda suprised at the droid invasion of Coruscant 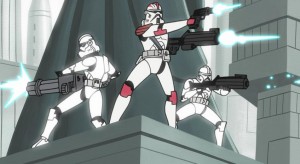 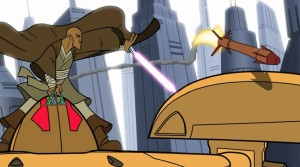 Valient effort by clone trooper in overrun quadrant on Coruscant 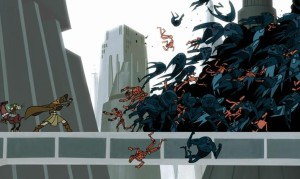 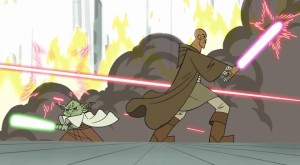 Yoda and Mace Windu fighting alongside each other on Coruscant 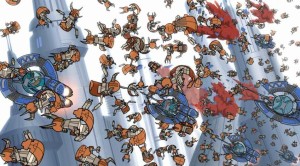 Yoda exerting a lot of Force power against droids on Coruscant 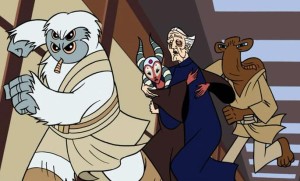 Three Jedi taking Chancellor Palpatine away from his Chancellor Office 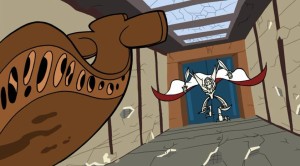 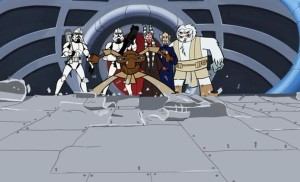 Roron Corobb roaring to get rid of super battle droids 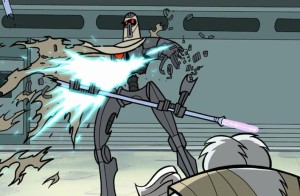 Roron Corobb slicing through a MagnaGuard in front of Foul Moudama 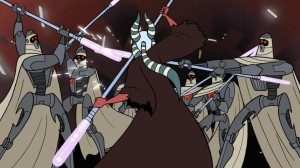 General Grievous with a choke grip on Shaak Ti 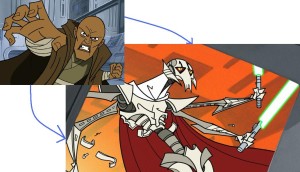 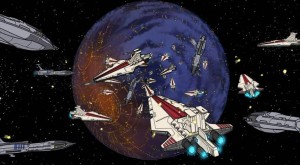 The third season of Star Wars Clone Wars was aired in late March 2005, just less than two months prior to the theatrical release of Star Wars Episode III: Revenge of the Sith. As opposed to the first season and the second season, the third season consisted of five 12+minutes episodes, lasting a little over an hour, which allowed for more plot and character development. Moreover, there was a little bit more dialogue, which also helped the viewer get a better sense of plot movement, which was tremendously helpful to bring us up to speed in order to finish in somewhat of a cliffhanger, perfectly setting us up for “Revenge of the Sith”.

Picking Up Where Season Two Left Off
The third season begins with ARC Troopers – yay! They’re back! I enjoyed them on Muunilinst in the first season and I was hoping they’d be back. They are just awesome!  one of the aspects that I think helps make them seem so awesome is the direction in that there is a certain quietness of the troopers, followed by intensity. They then arrive with General Grievous fighting Ki-Adi-Mundi, where we had left off at the end of Season 2 on Planet Hypori, just as Grievous disarms Ki-Adi-Mundi of his lightsaber.  The ARC troopers save Ki-Adi-Mundi’s life by unloading on Grievous.  However, he is able to eventually begin to attack them, killing a few (interesting to note that the ARC Troopers die here and some on Muunilinst to battle droid snipers).  Although they keep him evading their firing at him, Grievous ultimately goes on the offensice until they have their gunship fire on him, forcing him to evade. Eventually, they load up the ship, with Ki-Adi-Mundi protesting that they need to go on the offensive, although the troopers say that the survivors won’t make it (“We can’t; the survivors will die. We have no time.”) So, they head off, with just Ki-Adi-Mundi, Shaak Ti and Aayla Secura. I was glad they were able to survive, although we clearly see that General Grievous is a very serious warrior (as is Ki-Adi-Mundi, by the way, who is able to take him on by himself).

Jedi Council Discusses General Grievous and Making Anakin Skywalker a Jedi Knight
Following on the tail of the previous events, we see the Jedi Council being concerned about General Grievous and the dwindling numbers of Jedi in the war. Then, Obi-Wan Kenobi suggests elevating Anakin from padawan to a full Jedi knight. While there are protests and quite a discussion, eventually, Yoda agrees.
The most significant discussion in the entire series takes place in the Jedi Council:

Ki-Adi-Mundi: “…we may have been exhausted, but when was the last time someone stood up to five Jedi and held his own? This must be dealt with.”
Mace Windu: “I agree. This General Grievous is changing the shape of the war.
Even Piell: “Our numbers were dwindling before and now this.”
Adi Gallia: “Yes, we need more knights.”
Obi-Wan Kenobi: “I know this will generate debate, but I suggest that, in this time of war, we forgo the trials and promote my padawan, Anakin, to Jedi knight.”
Oppo Rancisis: “This is preposterous. We can’t set aside our most hollowed traditions.”
Ki-Adi-Mundi: “In this time of need, why do we hold back The Chosen One?”
Mace Windu: “Whether or not he IS The Chosen One is still to be determined.”
Even Piell: “Palpatine has been requesting this for months now.”
Mace Windu: “Politicians have no voice in Jedi matters.”
Kit Fisto: “Well, he is a cunning warrior and our best pilot.”
Adi Gallia: “But he is reckless with his gifts.”
Obi-Wan Kenobi: “Sometimes, in the past, yes. But, regardless, Anakin has been through things more difficult than the trials. Surely, he passed a trial of skill when he defeated that dark assassin on the fourth moon of Yavin. And he endured an atrocious trial of the flesh at the hands of Count Dooku. And he continued to pass every test of courage this war has dealt him.”
Eeth Koth: “It would seem he would have but one trial left to face.”
Shaak Ti: “Testing the spirit.”
Even Piell: “Facing the mirror.”
Oppo Rancisis: “That is what concerns me. To walk the path of the Jedi, one’s spirit must be strong. That requires discipline. And he has often disobeyed you, has he not, Master Kenobi?”
Yoda: “Did you not disobey me, time to time in your youth, Master Rancisis?”
Yoda: “A just debate this is, but, in these days of war, need all the knights we can. Unorthodox young Skywalker’s career has been. So, too, will be his trials. Trust in the force I do. A knight he shall be.”

This is an interesting way for Anakin Skywalker to become a Jedi knight: not unanimously and, owing to the exigent circumstances, becoming one despite not fully going through all of the trials.

We later see Anakin being called to the Jedi Council by Obi-Wan Kenobi and Anakin is not happy about being scolded for being late.  However, Kenobi then leads him to the council chambers, where he officially becomes a Jedi knight.

Anakin, Padmé & C-3PO
Throughout the season, we see Anakin and Padmé a few times, trying to unite despite the tough circumstances being amidst a war.  They are very much continuing their secret relationship that began in Episode II. One of these times that they secretly get together, we see C-3PO, who is now gold on account of his role:

Anakin: “You look different, 3-PO.”
Padmé: “It’s your new gold plating.”
Anakin: “Gold plating?”
C3PO: “Oh, yes. In the service of a senator, one must be presentable.”

This interaction helps us understand why C-3PO is silver/gray in the first two movies but gold later on….  On another occasion, amidst the many battles in which Anakin is involved, we see Anakin briefly returning to Coruscant to visit Padmé, who sees his scar beneath his right eye (unexplained, but presumably in battle).

Anakin Skywalker Proving Himself as a Great Warrior and Pilot after Becoming a Jedi Knight
Following Anakin Skywalker’s elevation to Jedi knight, we are shown three snippets of the end of battles in which Anakin is proving his worthiness of being a Jedi knight. The first of these three shows Obi-Wan Kenobi and Anakin Skywalker fighting side-by-side, masterfully winning a battle. The second shows Anakin helping out a Jedi knight (Saesee Tiin (although, as opposed to our seeing him in the first season, both of his horns are complete)) in space battle, and the third shows another battle in which a few Jedi (Voolviff Monn, Aayla Secura, and Eeth Koth) are struggling and Anakin helps them out.

We also see Anakin brilliantly leading Obi-Wan to a secret tunnel and destroying defenses in another battle, allowing them to win the battle in a much shorter time period than expected.

These battles surely demonstrate to us Obi-Wan Kenobi’s description of Luke Skywalker’s father in episode IV: “He was the best star pilot in the galaxy. And a cunning warrior.”

Separatists Embark on a Successful Strategy
Despite the previous successes of the Republic and the Jedi knights, we are also then shown a few scenes of the Separatists making their moves, including an invasion of Kashyyyk, as well as winning on other planets.

Count Dooku: “Don’t let your pursuit of trinkets cloud your reality. Remember what I taught you, General: if you are to succeed in combat against the best of the Jedi, you must have fear, surprise, and intimidation on your side. But, if any one element is lacking, it would be best for you to retreat. You must break them before you engage them. Only then will you ensure victory.”

Towards the end of count Dooku’s didactic dialogue with General Grievous, we see Lord Sidious communicating via hologram (just as in season one when he watched Count Dooku fighting Asajj Ventress) and the following dialogue ensues:

Lord Sidious: “Report, General, what’s new from the front?”
General Grievous: “The strategy is working perfectly, my lord. The Jedi and their forces are stretched thin across the outer rim worlds in a vain attempt to contain our new offensive.”
Lord Sidious: “Good. Good. Now is the time to strike. Now is the time to launch our final operation. Is everything ready for your special mission?”
General Grievous: “Yes, Lord Sidious. The unsuspecting fools know not what awaits.”

Obi-Wan & Anakin Get Sidelined
Following their win at a battle, Obi-Wan and Anakin get an urgent message from Mace Windu and Chancellor Palpatine on Coruscant, saying they have some intel on General Grievous’ position (although Windu shares his concern about how dependable the intel is).  So, they head out on a reconnaissance mission to Nelvaan. While there is a problem on the planet, this is really a distraction from the war.  Of significance, Anakin goes on somewhat of a soul-searching mission to save the warriors of Nelvaan from a medical factory of sorts of the Separatists.  To be honest, this whole sequence was not only a change of pace of the increasing excitement about the battles and the war, so it slowed things down, which was quite unfortunate, but also my absolute least favorite segment of the series.

Separatists’ Surprise Invasion of Coruscant
With a surprise invasion of Coruscant, seemingly the completion of the Separatists’ strategy, even Yoda is surprised.  We see Mace Windu and Saesee Tiin take to fighter craft – there is not much dialogue, which was not so well done (very simple dialogue), but the action is entertaining.  At some point on Coruscant, Windu is involved in a collision and his craft is destroyed, although he hops onto a droid craft and hotwires one of them, which is quite impressive!  We see Tiin fighting in the space off of Coruscant and doing well, eventually landing on a Republic ship and, along with dozens of clone troopers with special gear, invade and takeover a Separatist ship.

At some point, Mace Windu and Yoda – who are engaged in battle, themselves and doing some really incredibly powerful fighting – realize that the droids are really after Chancellor Palpatine….

As Grievous is loading up his ship to depart, Mace Windu arrives and successfully crushes his insides from afar, using the Force, causing Grievous to have some sort of breathing problem.

The series concludes with Obi-Wan Kenobi and Anakin Skywalker receiving an urgent message from Coruscant from Mace Windu: “Kenobi, Skywalker, Coruscant is under siege and General Grievous has abducted the Supreme Chancellor. You must return immediately. You must rescue Palpatine.”  Leading us right on up to the very beginning of Episode III.