Blessing on Seeing a Large Crowd of Jews 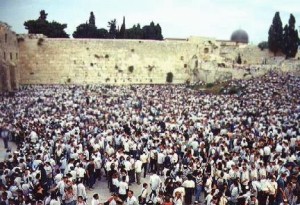 These past couple of days, I have had the pleasure of being with hundreds of other young adult Jews here in New Orleans and there is such a great amount of energy to being with them.  It makes one wonder if there is a blessing for being with so many.  Well, the Talmud actually presents one such blessing (bBerakhot 58a):

What’s interesting is that not only is there a blessing for it, but the text describes a reasoning as to why the blessing should be used.  However, according to the reason given, it should not matter as to why it is just Jews that one is making the blessing.  Indeed, in the Tosefta (tBerakhot 6:5), we see that it is when one sees crowds of people and not necessarily crowds of Jews that the blessing is to be said.

We then are given the example of Ben Zoma, who saw such a crowd on the Temple mount and said this blessing.  (While he actually goes on to say more about all the people there, I might treat that elsewhere, but I will bracket the remainder of his words for now.)

However, what’s strange is that this blessing is to be quite infrequently said, since the Talmud also records (bBerakhot 58a):

While it is unclear why this latter text pops up to limit the ability to say this blessing (for instance, we don’t know if Ben Zoma saw a few hundred people on the Temple Mount and that was good enough for him, or if he really saw 600,000 people there), it is still nice to know there is such a blessing in the Talmud

“Therefore, Let’s Say Both of Them”: The Blessing Combination of Rav Papa

Rava and Jews Who Were Not Fond of the Rabbinic Traditions

10 Responses to Blessing on Seeing a Large Crowd of Jews