How much money do exhibitors make at comic conventions – whether artists, small press and how much do they make at differently-sized comic conventions?  These questions were explored last week at the fifth annual Long Beach Comic Expo, which I was fortunate to attend, at a presentation by Amanda Meadows (of Devastator Press).

Meadows presented key findings from a survey that she and Geoffrey Golden had sent around to their colleagues who had sold merchandise at comic conventions in 2013 and collected their findings and put them online. 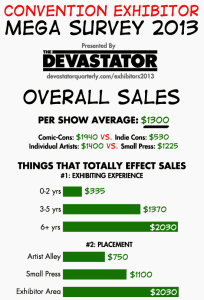 A glimpse into the Devastator survey

Although the findings are on their website, Meadows still discussed some meta-findings, such as “2013 was a really big year for conventions” in terms of merchandise sold.  Also, placement matters – if one is stuck in a corner, you’re not going to make as much money as if you are more prominently placed by foot traffic, etc. And, in considering how much money people make in selling their wares, San Diego Comic-Con is different than the others.

One another suggestion Meadows had was to try out a convention for 2-3 years to see how well sales are doing.  However, if they are stagnating or going down, it is not worth it to continue coming back to that comics convention.  As a rule of thumb, Meadows said, they see if they make a cost and a half – if not, they’re not coming back.

This presentation had a cozy feel to it – inasmuch as the other panels I attended had an intimate atmosphere where attendees could easily ask questions, this one had a nice dialogic element to it, whereby attendees could share their experiences, as well.

Long Beach Comic Expo is a true comic con focused on creating a fantastic family friendly experience for both fans and exhibitors alike in Southern California.