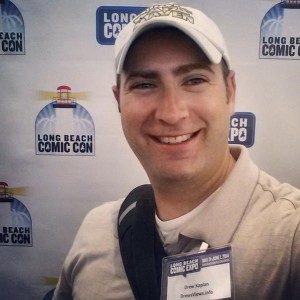 My first time at the Long Beach Comic Expo

However, despite the smaller size, I actually appreciated the more intimate atmosphere of the expo, which allowed attendees to more easily access and connect with vendors, artists, and more. Indeed, Phil Lawrence, co-founder and sales director of Long Beach Comic Expo, told the Long Beach Press-Telegram that Long Beach Comic Convention (which takes place in the fall) “has always been more of a broader-based convention with a more broad appeal. This expo is more intimate.” This was certainly noticeable in the panel sessions, in which participants were able to easily and intimately interact with the panelists. 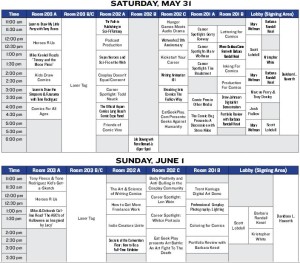 While this weekend was the fifth such for the expo, it was the first time it had a second day. According to a press release on April 4th, the expo “expanded from a one-day event to an entire weekend-event thanks to the support from fans, special guests and exhibitors who have made this one the most popular spring comic conventions in Southern California.” As can be seen at right, the schedule had programming for both days (although Saturday had more than Sunday). 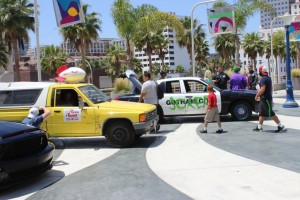 A few cars parked outside the convention center

As quoted in Gazettes, Lawrence, offered the reason for the chronological expansion: “After the first year of Comic Con was so successful, people came to us and said they didn’t really want to wait a whole other year. Also, people would travel from all over, so one day didn’t really seem like enough. They wanted more and so we are going to give them more.”

Having gone yesterday, I can say that I was there for the first ever Sunday at Long Beach Comic Expo!  While I was not able to contrast the Sunday with Saturday, ConShark has a review of Saturday, including their assessment that “with panel rooms and the exhibit hall separated by the small upstairs lobby, the event felt intimate without the sacrifice of quality of vendors or quantity of panels that you usually see in that situation.” 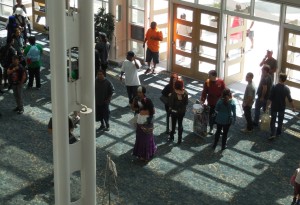 There was ample space in the promenade for cosplay

The exhibitor room was a nice, small-ish space, which comfortably contained the vendors, artists, and more.  As mentioned before, the panels offered a nice opportunity to connect with others (not just panelists, but other attendees) easily, which was great. There was also a separate cosplay and fan groups room, which seemed cozy.  There were a couple of Star Wars groups represented (for more, see my post on Star Wars matters of interest at the expo), the famous cosplayer, Ani-Mia, and several others (including EatGeekPlay, which had free giveaways). 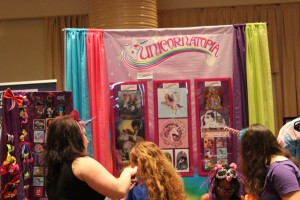 Overall, I liked my time there: people were easy to approach and the atmosphere was generally laid-back. I had no problem registering and it was easy to walk around the exhibitors’ floor.  As for the panels, I plan on writing about the ones I attended in the weeks to come (stay tuned). 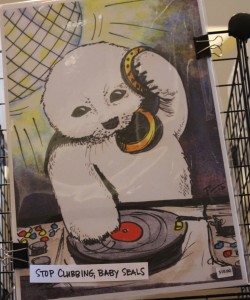