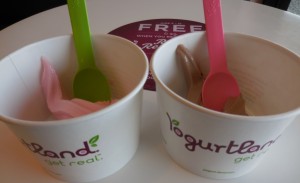 Today, Yogurtland launched two new flavors for summer – raspberry lemonade sorbet and peanut butter cookies and cream.  And I went to my local story to try them out. 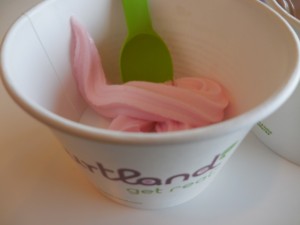 According to a press release, raspberry lemonade sorbet is a “new non-dairy option for Yogurtland fans, this vitamin C-fortified flavor combines real lemons and raspberries from the Pacific Northwest for a sweet and tart experience that is the perfect refreshment on a warm day.” I found it to be a nice, light and almost bubblegum-like flavor.  Also, as to its texture, it’s lightness flows easily off of the palate, which is perfect for a summer flavor!

For the latter, “American-grown peanuts are dark-roasted to our Flavorologist’s exacting standards to bring out their richest, nuttiest flavor, and then milled into a custom-made peanut butter. The peanut butter is combined with America’s favorite chocolate cookie for a satisfying treat that is rich, indulgent and craveable.”  I found this flavor to be very good, although the peanut butter flavor dominates this combination. While one can detect the cookies and cream flavor especially as the yogurt departs from one’s palate, it is not readily noticed. The overpowering peanut butter flavor is not a bad thing, though – I, however, had hoped that the cookies and cream flavor would have been more pronounced.

What was unclear from the press release was how long these two flavors would be available in stores.  A phone call to the corporate office yielded an answer that it is up to each of the stores.  When I asked an employee at my closest store, she responded that they would only be in-store for a couple of weeks. {Update: a separate phone call with corporate yielded the response that these flavors will be in stores for roughly a month (while supplies last).}

“It’s not a surprise that peanut butter flavors are among our most popular. Our Peanut Butter Cookies and Cream will take you back to your favorite childhood flavors in a delicious way,” said Scott Shoemaker, chief Flavorologist™ at Yogurtland (also according to the press release).  “Peanuts are America’s favorite home-grown snack, and their flavor adds taste and nostalgia to any product, including frozen yogurt,” said Cathy Johnson, marketing specialist at the National Peanut Board. 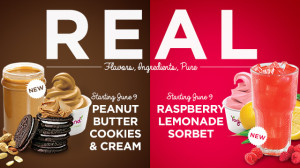 Whether traditional or exotic, each flavor uses real ingredients sourced from their original locations. By controlling the entire frozen yogurt making process, Yogurtland has raised the standards for flavors and quality to new heights and much to the delight of millions of fans.  All of Yogurtland’s frozen yogurt flavors meet the National Yogurt Association Criteria for “live and active culture frozen yogurt” and are produced in a kosher-certified facility. Yogurtland features non- and low-fat yogurt flavors as well as non-dairy and no-sugar-added choices.

Press Releases from My Original Blog

First Visit to Trattoria Natalie
This entry was posted in Food and tagged Food, Yogurt, Yogurtland. Bookmark the permalink.