Rude comments while in cosplay, online bullying, and dealing with body dsymorphia were topics dealt with last week in Long Beach. A panel on “Body Positivity”, which featured six women cosplayers, took place last Sunday at the fifth annual Long Beach Comic Expo to explore these issues and more. Moderated by Kaddie O’Keefe, it also included Chrissy Lynn, Molly McIssac, Yuri Cooky, Paige Warren and Ani-Mia. Attending the expo, I decided to hear about some cosplay issues through which these women go. 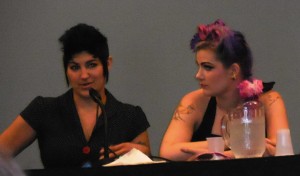 “I have had hard times at conventions, dealing with cosplay and adversity,” stated Chrissy Lynn, citing an example: “‘That’s not catwoman, that’s fatwoman.'” However, she stated, she knows that she is a bigger lady and she “realized it’s okay to be me and to be who I am.” To deter rude comments, she advised, “Let people know you are happy and confident.”

Molly McIsaac said that she found herself through cosplay; she used to have body dysmorphia in high school and, during her recovery, discovered cosplay, which helped her through this process, in that helped her feel better about herself (she recommended people watch “How Cosplay Saved My Life” for more). She shockingly stated that she gets rape and death threats every day by email (and, by shockingly, I meant I was shocked!), but she advised, “If you acknowledge that they’re hurting you, that’s what they want”, so don’t acknowledge them. A lot of the online bullying, she said, are people hiding behind screens. She said that she gets threats because she is an outspoken woman and people want to control such women, thus the rape and death threats.

However, Kaddie O’Keefe, suggested, sometimes the best defense is getting them right back – if you see someone in-person or on-line, to bring up what their comments were, especially to their faces – they are used to hiding behind a screen and being anonymous. She also advised that “if you don’t have a healthy sense of your body, you need to trust yourselves with love and respect.”

Yuri Cooky said that, by putting herself out there, it kind of feels a little like middle school in the rudeness of the comments she receives doing cosplay. However, she said, “you reach a point where you get past the BS and people appreciate who you are” and, more importantly, she pointed out, “not bringing out who you don’t want to be”, which is a reaction that they might be trying to elicit. She also pointed out that “every time someone shows their confidence, someone’s going to want to tear them down.”

“It scared me,” Paige Warren said, “that women had such hatred of their own body and wanted to pass it on” to other women. Body positivity, she said, “has to be for everyone” and not just cosplayers.

Ani-Mia speaking while Paige Warren and Yuri Cooley look on

“I’ve had body issues all my life and my weight’s always fluctuated,” said Ani-Mia. “I have been told I was fat a lot in middle school and high school. But if people can’t accept me for who I am, screw them.” When doing cosplay, she said, one opens oneself “up to all sorts of comments.” Moreover, she pointed out, “‘misery loves company’ – miserable people make miserable comments.” If one “pokes around Facebook pages” of the people making such comments, “you can figure out why they’re upset” and what’s wrong with their lives.

While body issues are not something with which women cosplayers deal with exclusively, the all-women panel came by Kaddie posting on Facebook about wanting to speak on this panel and receiving responses from these other women cosplayers. However, she did state that she hopes to include men cosplayers, as well, in future such iterations of the discussion. As to a panel that focussed on gender issues, Kaddie stated that while there used to seldom be panels discussing gender, more and more panels at comic conventions do.