Last night, my wife and I went to a restaurant about which we had heard good things, but had not yet had the opportunity to try.  The restaurant, Trattoria Natalie, has been around since September and is a kosher dairy restaurant on Pico Boulevard in Los Angeles, which was good, since we were still mourning over the loss of Milk & Honey, a solid go-to kosher dairy restaurant on Pico Boulevard.  When walking in, one immediately notices the nice, modern, stripped-down look with brick walls and exposed wooden beams.  It’s also one large room, so there’s nothing hidden.

As to the food, there was a lot that looked good, although there’s only so much can order at one meal.  So, still mourning the loss of the really yummy mozzarella sticks at Milk & Honey, I ordered the Pan-Fried Mozzarella Sticks as an appetizer: they were fine – they were what one would expect, although nothing special – no special spices, etc.

However, the appetizer my wife chose was amazing!  She ordered the Garlic Parmesan Fries, which were really tasty!  As french fries go, their texture was nicely crunchy – I really enjoyed that element, but that’s not what made them phenomenal.  It was the saltiness and cheesiness of them that really did it.  They are a reason for which it is worth coming back!  One thing that was a bit odd was the serving on the side of ketchup – 1) these fries do not need ketchup, but also 2) I had some of the fries with the ketchup and it’s such a different flavor profile that doesn’t go along with it, so perhaps they ought to figure out a different sauce to serve with it if they serve a sauce with it at all.

Normally, I don’t get soups – I simply get an appetizer and an entree; however, I saw that they had French Onion Soup, so I ordered that.  It was really good and I’m glad I ordered it – it was cheesy and tasty, etc. – it’s an excellent choice to get. 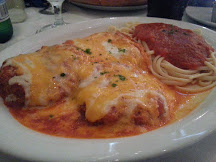 For my entrée, I ordered the Eggplant Parmigiana, which was very good – a solid version of the dish.  It came with three eggplant patties and some spaghetti with sauce.  The eggplants were really good.  The spaghetti, itself, was good, although the pasta sauce on top of it was really tasty (the sauce, alone, was encouraging to have more of it).

My wife ordered their white pizza, which she enjoyed, although I don’t particularly like white pizza, so I will refrain from commenting on it. However, my wife said she enjoyed the crispiness of the crust.

Overall, we liked our culinary experience at Trattoria Natalie and are looking forward to enjoying it again.