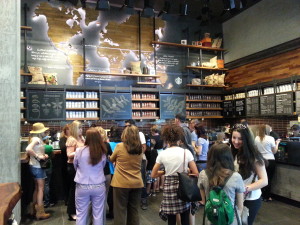 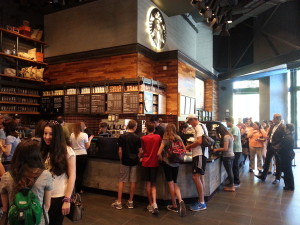 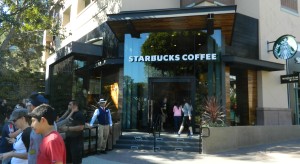 Outside of Starbucks in Downtown Disney 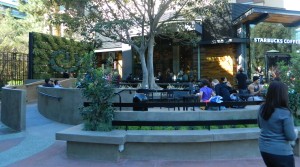 Patio at Starbucks in Downtown Disney in the daytime

For many months, visitors to Downtown Disney in Anaheim, California passed by a boarded-up section, behind which construction took place. This boarded-up segment near the World of Disney, had a sign indicating that a Starbucks would be arriving in that space, sometime in the winter. Today, that new Starbucks store opened up, to the enjoyment of all (as I heard one passerby say today: “Thank goodness those boards are gone”).  The 5,600-square-foot cafe is the first company-operated Starbucks location on Disney property, according to a Starbucks press release. While Starbucks already has been in Disney California Adventure (in the Fiddler, Fifer and Practical Café) since 2012 and opened up a store this past fall at the Market House in Disneyland on Main Street, this is the first one to be operated by Starbucks.* With millions of guests visiting the Disneyland Resort from all over the world each year, the new store strives to serve as a destination for guests looking to relax and recharge as part of their visit.

“This store is a reflection of two iconic brands coming together to offer their customers the kind of high quality experience they expect in a way that embodies the unique passion of each,” said Arthur Rubinfeld, chief creative officer and president, global innovation for Starbucks. “Collaborating with Disney offered us the opportunity to create a unique moment of connection for our customers in a way that evokes the magic that their guests expect.” 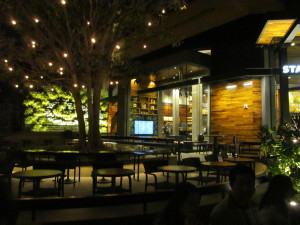 Patio at Night of Starbucks in Downtown Disney

“The LEED certified cafe,” wrote Orange County Register’s Nancy Luna today, “also embraces Starbucks’ commitment to sustainability with design elements that include exposed concrete pillars, floor-to-ceiling windows reminiscent of a mid-century modern Eichler house, siding made of reclaimed box-car wood and a communal bench crafted from a tree trunk.” While there is a minimal amount of indoor seating, which makes it an unideal place to sit inside and work on a computer, the outdoor patio is quite nice, which is designed around an old growth ficus tree, reclaimed wood siding and a living, green wall with more than 1,000 native plants in the shape of a coffee cup that serves as a backdrop. 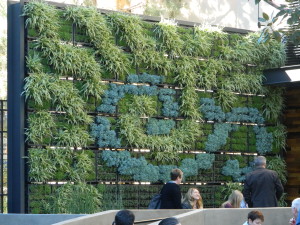 While there is no shortage of space inside for tables and seating at the 5,600-square-foot cafe, it seems that Starbucks wanted to steer customers away from sitting inside on their computers, encouraging them to sit outside on the patio, which makes sense as they are targeting tourists and not folks working. The patio is certainly very nice, with both the gorgeous Southern California weather and the people watching. As I observed last night, the lighting for the patio is also very pleasant, with many lights on the tree. 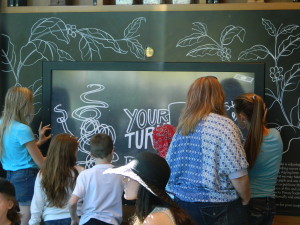 Starbucks is attempting to present more of an engaging experience, with presenting the story behind Starbucks coffee projected across a 10-foot video installation on a wall, as well as a first-of-its-kind interactive touch screen, which is great for keeping children occupied while their parents order coffee. As Luna wrote today, describing it: “The interactive screen acts like a mirror. When you sit in front of it, it projects your image on the screen as a chalk painting. Guests can also use their fingers to scribble and draw.”

“The store’s coffee passion wall video is rendered to look like an animated painting or drawing. That handcrafted look is a reflection of the handcrafted beverages we serve every day around the world,” said Bill Sleeth, Starbucks vice president of design for the Americas. “Disney and Starbucks challenged each other and the result is a beautiful, unexpected gathering place.” 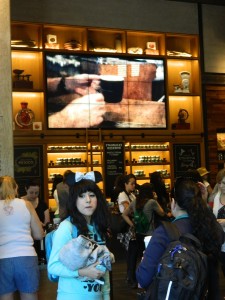 As to the coffee, the store offers some of the rarest coffees available as part of the Starbucks Reserve® coffee line and Clover® brewing system. As Nancy Luna wrote today: “The Clover barista system is found in 50 Starbucks cafes in the greater Los Angeles area and 500 across the U.S. The reverse French press coffee brewing system is geared for purists – those who crave every nutty or fruity flavor found in a unblemished single origin cup of java. The Clover coffee is prepared in an exhibition bar separate from the main barista counter.”

The hours for the new store are 7am-11:30pm, Monday through Thursday and 7am-12:30am, Friday through Sunday, which allows guests to come before the theme parks open and stay later. 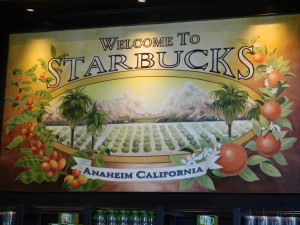 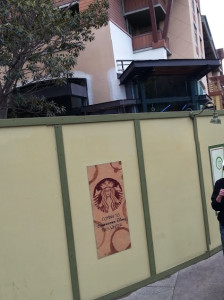 Starbucks being built in Downtown Disney with boards

—–
* The first Starbucks location to open on a Disney property was in Disney Village at Disneyland Paris in 2009. There are a further two locations at Walt Disney World Resort in Florida: Main Street Bakery at Magic Kingdom park and Fountain View at Epcot.

Kashrut Posts from My Original Blog

Contest Opens to Translate Part of the Shulhan Arukh