The Mitzvah Against Verbal Oppression (“How Not to Be a Jerk”): An Example from the Babylonian Talmud 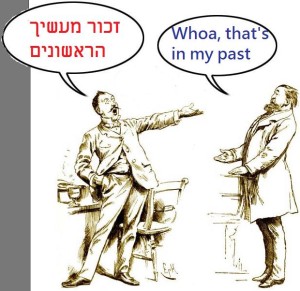 An example of verbal oppression, according to the Talmud

I had the opportunity to be one of the speakers at the tenth annual Jewlicious Festival, held recently in Long Beach.  Ten days ago, one of the two text-based discussions I led, which I called “What Not to Say”, had participants explore a text in the Babylonian Talmud, which tries to understand the commandment: “וְלֹא תוֹנוּ אִישׁ אֶת-עֲמִיתוֹ, וְיָרֵאתָ מֵאֱלֹקֶיךָ: כִּי אֲנִי ה’, אֱלֹקֵיכֶם (And a man shall not oppress his fellow, and you will be in awe of God, because I am the LORD your God)” (Lev 25.17).  After the text (a beraita) tries to differentiate it from the commandment found in Lev. 25.14, it then provides a handful of examples (which I am numbering) (bBava Mezi’ah 58b):

(1) If one had repented, do not say to that person, “Remember your earlier actions.”
(2) If one was a child of converts, do not say to that person, “Remember the actions of your forefathers.”
(3) If one was a convert and came to learn Torah, do not say to that person, “The mouth that ate improperly killed animals, diseased/wounded animals, unclean animals, and creeping animals is now coming to learn the Torah that was spoken from the mouth of the Powerful?”
(4) If one had pains coming upon them, becoming sick, or if they had to bury their children, do not speak to that person the way that the friends of Iyov/Job spoke to him, “Is not your fear your confidence; your hope the integrity of your ways? Please remember: was there anybody who was innocent that perished?” (Job 4.6-7).
(5) If there were donkey-drivers requesting straw from one, do not say to them, “Go to so-and-so who sells straw” and knows that they have never sold straw.
(6) Rabbi Yehudah says, “One shouldn’t even place their eyes on an item for sale at the time that they have no money, for the matter is given over to the mind; and everything that is given over to the mind is said of it, ‘And you shall be in awe from your God’ (Lev. 25.17).”

We see five examples provided, with Rabbi Yehudah also including one more.  It seems that the first three are not anything actionable – one cannot do anything about them.  It’s almost as if the one who is transgressing this commandment is one who is bringing up something from one’s past.  Meaning, if one had put those sinful activities behind them and had moved beyond the person who they were, then someone comes along and begins taunting them about those actions.  Look, that person is better now and had repented, drop it.

With #1, they repented and no longer commit that sin.  With #2, it wasn’t even themself who committed those actions; moreover, their forefathers had done what they had done and were not under Jewish obligations.

With #3, there is something deeply poetic about the focus on the mouth: God’s mouth is out where Torah eminates, one’s mouth is where one had erstwhile consumed unkosher animals, yet now one’s mouth is out from which words of Torah, which are holy are now coming.  What’s fascinating about this third example, beyond the poeticism, is that the offender is not saying “You used to be a gentile”, but merely pointing out the seeming irony of this vessel that had unholy matters passing through it and now has holy matters passing through.  Moreover, that eating was done permissibly and not a sin, since one was not a Jew then!  It’s such a mean thing to say, although the transgressor of the mitzvah under question is not simply reminding them that they had converted – that’s not part of the desideratum.

Example #4 is simply being mean – one is already down and now they’re emotionally beating up on that person – so not something to do.  There’s a time and a place for theodicy, but not when someone is suffering.

Example #5 shifts the discussion more than with example #4 – one may have no prior knowledge of this donkey driver, but one is still being a jerk to them.  Why would you send this person in a futile pursuit of straw when their donkeys are presumably quite hungry?  It’s really mean.

Finally, there is example #6 – Rabbi Yehudah’s case concerns one who has no money on them and getting the hopes up of the shopkeeper, who is looking forward to a potential sale, yet this is unfair to the shopkeeper.  However, I can easily see the side of those who did not accept Rabbi Yehudah’s opinion: the moneyless shopper is not oppressing the shopkeeper and, furthermore, may not even be speaking!  Moreover, another possible reason that the sages disagreed with Rabbi Yehudah was that it could be included under Lev. 25.14, which is a monetary concern.

One thing that’s great about using this text in discussion with people (especially the demographic with which I frequently work, young adults) is that whilst it’s proscriptive, there’s a great amount of wisdom embedded within it and is very accessible to people who have had little interaction, knowledge, or familiarity with Jewish texts/concepts, since it involves everyday conversations.  Because of this, people are quite familiar with dialogic interactions and have had bad experiences and can see some great measure of wisdom from our tradition

“Therefore, Let’s Say Both of Them”: The Blessing Combination of Rav Papa

21 Responses to The Mitzvah Against Verbal Oppression (“How Not to Be a Jerk”): An Example from the Babylonian Talmud