Where to Get the Best Crew, Gear, Ship Upgrades, etc. in Firefly The Game 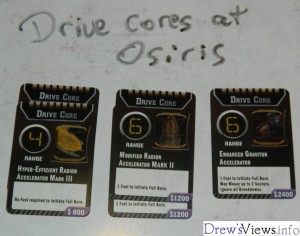 Drive Cores are only to be found at Osiris

So, you got Firefly The Game (or one of your friends does and you play it), which came out just this fall, and are wondering what are the best crew, gear and ship upgrades in the game, right?  And you’re probably also wondering where to get them?  Well, I was curious about those questions after having begun playing, as well, so I decided to find the best and here are my results:

Some good gear at Space Bazaar

Some good crew at Space Bazaar

Some great crew at Silverhold

Silverhold:
Some great crew: Saffron (2 diplomatic and one mechanic), Jayne, Zoë, and Stitch (all of whom have two fighting)
Great offensive gear (best in the game!): Burgess’s Laser (3 fighting & FIREARM and EXPLOSIVES), “Vera” (2 fighting and 1 diplomacy and SNIPER RIFLE and FIREARM), and Burgess’s Hovering Bad-Ass Space Jeep (2 fighting and TRANSPORT and FIREARM) 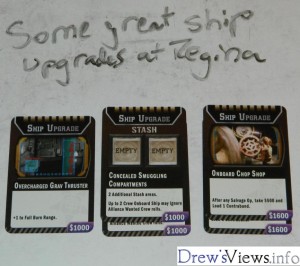 Some Great Ship Upgrades at Regina 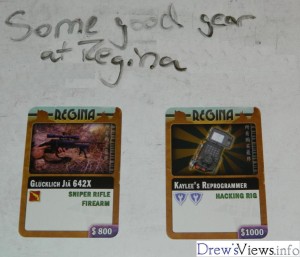 Some good gear at Regina

Regina:
Some great ship upgrades (there are others): Onboard Chop Shop, Concealed Smuggling Compartments, and Overcharged Grav Thruster

Some good crew at Regina

Some good crew at Persephone

Some good gear at Persephone

Persephone:
Some good gear: bunch of things with big green letters
Some good crew: Simon Tam, River Tam, and Shepherd Book, whom they pick up in the pilot episode, as well as Emma, Bree, and Billy

A couple of great crew at Osiris

Ship Upgrades are great there! Best place in the game for them (granted, you can only get them here and Regina, but they’re better here)

Now that you know, you can play with knowing where the best crew, gear and ship upgrades can be found in Firefly The Game!

The Unfortunate Problem of Missing the Context of the “Pluralism” of the Academies of Shammai & Hillel
This entry was posted in Entertainment and tagged firefly, fireflythegame, Miscellaneous Mondays. Bookmark the permalink.

56 Responses to Where to Get the Best Crew, Gear, Ship Upgrades, etc. in Firefly The Game