Last month, a new Jewish magazine in Southern California launched into existence with its first issue, following up this month with its second. Tomorrow, its third issue will be coming out.

Begun by Jonathan Strum, he sought to create a new publication because he was “tired of seeing the vibrant, active and robust Greater Long Beach Jewish community — a community with a proud heritage going back over 100 years — overlooked by publications based in Los Angeles and Orange County.”1 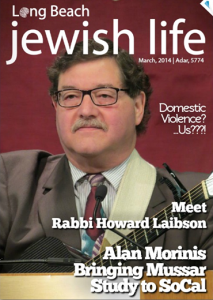 In the first issue, he wrote: “Are you tired of hearing that Long Beach is just a little too far south of Los Angeles or just a bit too far north of Orange County! I know that I am!”2 While Orange County has a monthly magazine, Orange County Jewish Life, and Los Angeles has the weekly Jewish Journal, Strum felt that Long Beach’s Jewish community deserves further coverage: “There is clearly no shortage of personalities, opinions and events taking place in and around the Greater Long Beach Jewish community. And that’s the community that we want to report on and to.”3

It’s true that there already exists the Long Beach Jewish Chronicle, however, that primarily serves as a broadcasting publication from the Jewish Federation about different Jewish agencies’ activities, etc.  The first two issues have featured local leaders, the first issue featuring Representative Alan Loewenthal and the second featuring Rabbi Howard Laibson, with each of them gracing the covers of each issue. 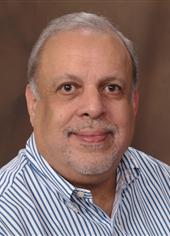 Strum “became interested in publishing Long Beach Jewish Life,” he says, because he “felt strongly that the active, robust Greater Long Beach Jewish community deserved its own magazine, and – to borrow a phrase – if we built it, you would come.”4

“In my 3-plus years of handling the marketing for the Alpert JCC, one of the things that I consistently heard from a number of our community leaders is that it was difficult to get any sort of Jewish media coverage of the news and events that were taking place in and around the Long Beach Jewish community,” said Strum via email.  “It seemed that, as in many other instances, we were a little too far south of Los Angeles and a little too far north of Orange County to warrant coverage from existing Jewish media.  My experience consulting to the magazine publishing industry told me that Long Beach represented a perfect niche for a local magazine that focused on the Jewish community in around the city.  Over time, I became quite passionate about wanting to produce something that would shine a spotlight on the people and events that were taking place right here, in our local community.”5 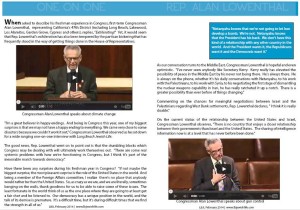 One of the very neat things about this new publication is not only is that it easily readable on one’s desktop web browser, but that it is also optimized for mobile devices, which really helps its accessibility.

As to why it is digital,

The short answer is that Long Beach Jewish Life is positioned for the future, rather than mired in the past. The slightly longer answer is that traditional ink-on-paper publishing is no longer a sustainable business model. If venerable magazines like Newsweek are finding themselves forced to cease publication, there is little point in a young start-up venture even considering going down that same path.7 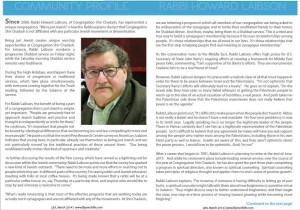 Focus story on Rabbi Howard Laibson in this month’s issue

So far, Strum reports, the responses from the community have been positive: “The response from individuals and organizations in our community, has been 100% positive. I’ve received more than 100 congratulatory emails from individuals who wanted to share their very kind thoughts with me. I’ve also had more than 400 people take the time to register their email addresses at our website, so that they can receive a monthly “heads-up” and a link to a new issue!”8

For updates and more, one can visit Long Beach Jewish Life’s Facebook Page.