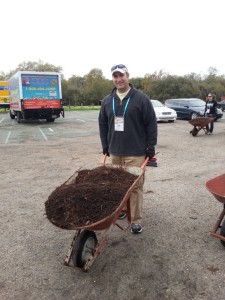 Using a wheelbarrow to move mulch

Last week, I took part in helping to beautify a public park as part of a national conference of young adult Jews. On Monday, March 17th, I was one of many dozens of TribeFest participants who came to New Orleans City Park to work on improving its look.

Our volunteer group was tasked with mulching and transplanting plants to surround trees. I am glad I was able to take part in such a project to help mulch, and help beautify the grounds, enabling visitors to better to enjoy themselves.  It was also great to literally see what our labor was accomplishing. For instance, we started with a large pile of mulch, which we eventually got to distribute around the trees along the parking lot and even had enough energy to move on to another mulch pile. Another group of us potted dozens of plants to ring trees, with further mulching.

Progression of the mulch pile, from beginning to end

“The Tribefest group’s efforts greatly improved the appearance of the area we worked in through the planting of new bushes and mulch,” said Earl Sires, Volunteer Manager of New Orleans City Park. “The mulch will also help to retain moisture, so the park will need to put less water on the plants to keep them healthy. Also, mulch prevents weeds from growing as it covers the soil surrounding the plants, so TribeFest’s project will have a lasting, sustained impact on the area.”

The TribeFest group “invested 375 volunteer hours in the park planting shrubs, plants and mulching hundreds of feet of planting beds,” said John Hopper, Chief Development Officer and Public Affairs Director of New Orleans City Park. “We only have four full-time employees to care for all the flower beds throughout our 1,300 acre park. It would have taken one of them 9.4 weeks to do all the work y’all did in just 3 hours!” 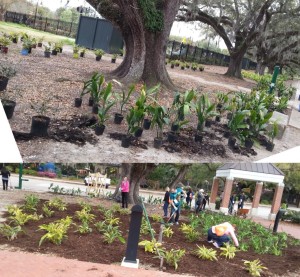 Plants around the trees: Before & After

According to Hopper, TribeFest contributed a check to cover the cost of the plant material and mulch, so not only did we work on improving the grounds, it did not cost New Orleans City Park! It was also nice to know that our work “contributed to the continued improvement and growth of New Orleans,” as Sires put it, and that “it will be appreciated by the park’s thousands of visitors for years to come.” 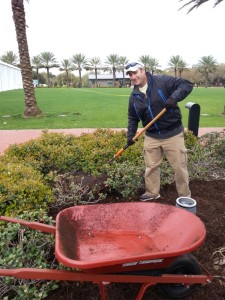 Helping out at the City Park was one of five options, with the other four being working with the elderly at Kingsley House, packing food at the Second Harvest Food Bank of New Orleans and Arcadiana, reading with students at ReNEW Schools, and helping out at Arc of Greater New Orleans.

So those that came to help out really wanted to be there working on improving City Park, which was noticed by Sires: “I was impressed by the group’s work ethic and motivation! From the moment the volunteers got off the bus, they were ready to get to work, and they worked hard through the duration of the project. I was thankful to get to chat and spend time with such a driven group of people, and I’m very appreciative of the effort they put into the project.”

City Park holds a special place in the hearts of generations of New Orleanians and is a must-see for visitors to the city. As a popular place to picnic, play a favorite sport, wander through its gardens or take a boat ride, the Park receives millions of visit each year. It is located in the heart of the city and is the largest recreation area in the entire metropolitan area, with 1,300 acres of parkland. 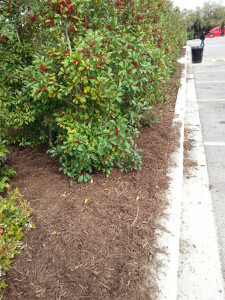 Mulched along the parking lot

Some Thoughts on TribeFest 2014, Part I: Main Stage & App